Ha long University, a states university of Quang Ninh Province, was established in 2014 on the basis of two colleges with a long history of development namely Quang Ninh College of Education and Ha Long College of Culture, Art and Tourism.

Ha Long University, a state university of Quang Ninh Province, was established in 2014 on the basis of two colleges with a long history of development, namely Quang Ninh College of Education and Ha Long College of Culture, Arts and Tourism. The university has 11 faculties providing 9 bachelor-degree programs. Currently, thetotal number of students studying at the university is 5,000 yearly and this figure is expected to reach and be stable at 10,000 after 2025.

Ha Long University is situated in the central part of Quang Ninh, a province in the Northeastern area of Vietnam and known as “Little Vietnam” because the province has all the geographical features of the country such as plains, highlands, hills, mountains, seacoast, and borderlines. The university has 2 campuses: Campus 1 is in Uong Bi, a city with Yen Tu historical site; Campus 2 is in the city of Ha Long, where there is Ha Long Bay, which has been recognized as the world’s natural heritage twice by UNESCO.

Many thousands of Ha Long University graduates have been working in numerous fields such as education, tourism, arts and social and cultural fields, considerably contributing to the development of the province and other places in Vietnam. The university has been awarded the Labor Order, first class and second class, and many other orders, medals and awards.  Students of the university have won numerous prizes in international and national contests in music, arts, tourism, and beauty contests

In 2021, Ha Long University was granted  a Certificate in Education Accreditation as it meets all requirements at the article 46 of the Circular 12/2017/TT-BDGĐT issued on May 19th, 2017 by the Minister of Education and training of Viet Nam. 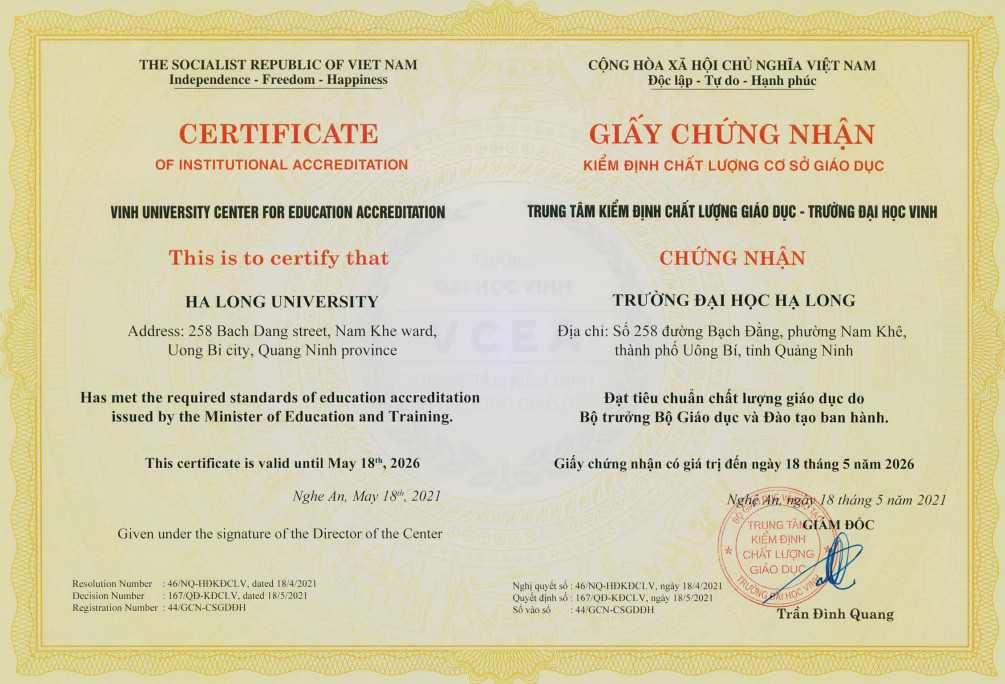 Some Picture of Ha Long University